Limit the number of points/polygons to be rendered

Rules of thumb for object limits

The most typical reason for poor QlikMaps performance is forcing QlikMaps to render too many points and/or polygons.  Performance thresholds vary depending on the data and environment, but below are some general guidelines beyond which performance starts to decline when rendering a QlikMaps object:

The aforementioned thresholds are not data limits; these are just thresholds where QlikMaps performance begins to degrade in many environments.  However, many QlikMaps implementations perform extremely well when rendering a much larger number of polygons/points. 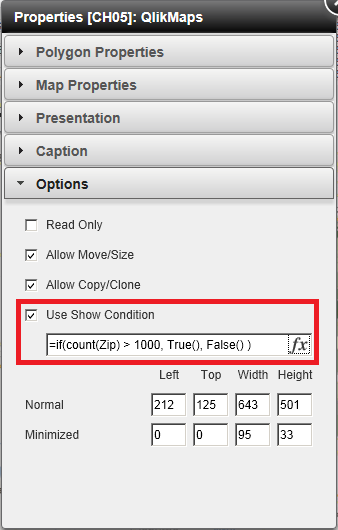 There are many ways to prevent a user from plotting more polygons/points beyond the acceptable performance range.  The most common way is to use the standard “Use Show Condition” option that is common to all QlikView Sheet Objects, as shown above.

When a particular map is hidden, here are some options to show an end user instead: